The ABCs of Gynecomastia Surgery

Many women seek out the counsel of a plastic surgeon because they’re embarrassed by breasts that aren’t as large or full as they’d like.

On the flip side of that, however, are men who have developed breasts and are equally embarrassed by this condition. For them, the focus is on reduction.

Fortunately, gynecomastia surgery was developed to treat this condition. 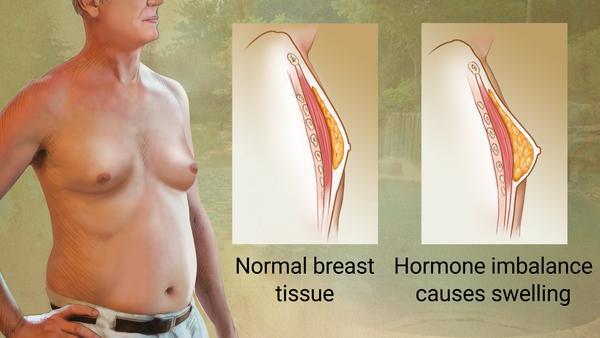 In cases where a man’s body produces too much estrogen in tandem with lower testosterone levels, the result can be enlarged breasts.

Gynecomastia occurs in about half of male infants due to the effects of their mother’s estrogen. The condition usually corrects within 2-3 weeks. Then estrogen often spikes again during puberty when the hormones get thrown out of balance. This typically resolves within six months to two years.

The prevalence of gynecomastia among men ages 50 to 80, however, is between 24% and 65%. Many men experience no symptoms of this imbalance. But for those with chronic swollen breasts, gynecomastia surgery is often the best solution.

The Causes of Gynecomastia

Bodies are complex, to say the least. And there are myriad things that trigger a hormone imbalance. Aside from the changes that occur during puberty and aging, there are other factors that can cause gynecomastia. Among them are thyroid, liver, or kidney disease, adrenal tumors, and alcoholism.

There are cases where enlarged breasts are a result of obesity. This condition is known as pseudogynecomastia and it’s typically treated with liposuction.

The patient is given either local anesthesia with sedation or general anesthesia. The plastic surgeon then makes a small incision on each side of the chest. These may be located within the armpit or around the areola. Excess fat is removed through the incisions and the surgeon sculpts a new chest contour before closing the incisions.

In cases that are not the result of obesity, gynecomastia may require surgical tissue excision. This procedure enables the plastic surgeon to remove more glandular tissue and skin that can’t be removed through liposuction. Thus, it’s also recommended for patients who have stretched and sagging skin around the breasts.

Using either general or local anesthesia with sedation, the surgeon will typically make incisions around the areola or within the natural creases of the chest. He or she will choose the areas of incision based on what will be most inconspicuous in terms of scarring. As with the liposuction procedure, excess tissue is removed and the area sculpted before the incisions are closed.

In most cases, patients feel ready to return to work within 1 week of surgery. Within a couple of weeks, they are able to gradually return to exercise.

And without the embarrassment.

Are You Troubled by Enlarged Breasts?

If your attempts to eliminate enlarged breasts have proven unsuccessful and you’re tired of trying to hide them, then contact us today for a free consultation.

Find out how easy it is to restore a more masculine appearance to your upper body through gynecomastia surgery.