There’s a lot of pressure that comes along with being a Hollywood celebrity and that can mean feeling the need to look great for photos and interviews, as well as on your TV show or in movies.

Former child star Jodie Sweetin, who played Stephanie Tanner on “Full House” is no different. This child actor is all grown up now in her early 30s and is once again a star — this time on the reprisal of the 1980s hit. Sweetin plays Stephanie on the Netflix show “Fuller House” and it’s pretty obvious to anyone watching that she’s a beautiful adult now. 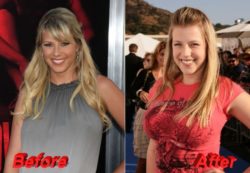 Sweetin has spoken out publicly about her positive experience with cosmetic surgery. From before and after photos, it would appear likely that Sweetin had breast augmentation, which is among the most common procedures many Hollywood celebrities have had. Comparing her breasts before and after plastic surgery, it’s clear they look bigger and firmer than previously. There have been rumors that Sweetin had a tummy tuck procedure to improve her figure.

Call Star Plastic Surgery today and ask out our 2 for 1 promotion. You’ll love your new look in the new year!